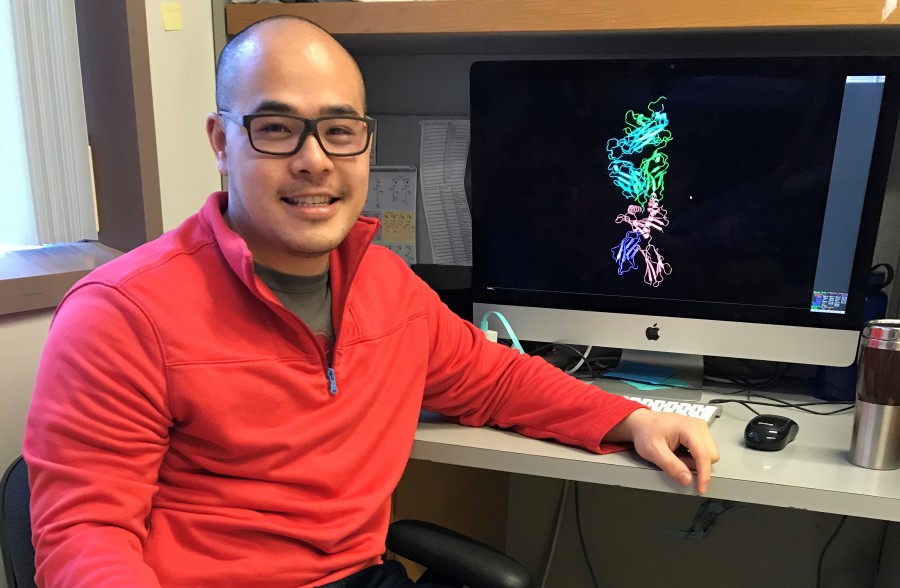 In high school, Marvin Gee was fortunate to get a jump start on his research career, working at the National Cancer Institute. Cancer had been a personal interest of his because of the death of his uncle who battled with the disease. His early exposure to bioscience research helped him realize that biology is like a complicated puzzle. It all eventually fits together to make perfect sense.

Gee is now working on one of the greatest puzzles of them all: how to harness the power of the human immune system to treat cancer. It’s a challenge that has taken him from his high school work to undergraduate research at Caltech and the Amgen Scholar Program to graduate school at Stanford, and, now to founding a company, gaining him recognition as one of Forbes 30 Under 30 in healthcare.

“We were quite surprised by the recognition given how new the company is,” Gee says of his 3T Biosciences cofounding team which was featured in Forbes last month. “I consider myself a scientist, so any recognition for the work is quite a nice surprise.”

Gee’s journey to immunology began working in the lab of Nobel Laureate David Baltimore at Caltech. He was engineering T cells to specifically target cancer cells in a type of treatment called adoptive T cell therapy. “What happens is that patients have natural immune responses to their tumors,” Gee explains. “The therapy tips the balance of the immune system versus the cancer.” The challenge, he says, is engineering the T cells so that they only target the cancer tumors and not other proteins.

Working in Baltimore’s lab was Gee’s first experience in immunology. He liked it so much that he chose to continue working in the same lab for his Amgen Scholars Program experience in the summer of 2011 and to continue the work throughout his undergraduate years. This continuity enabled him to co-author a paper published 5 years later on improving the safety of T cell therapy.

“Not only was the research fruitful, but it fed into my natural interest in immunology and led me to my graduate studies in immunology at Stanford,” he says. “The research experience, scientific writing skills, and networking skills I gained at Caltech and through the Amgen Scholars Program really prepared me for the difficulties of graduate school.”

What was most unique about the Amgen Scholars Program, he says, was that he got to see for the first time how research translates to industry. “I had been in labs since high school and never considered working in industry or biotech,” he recalls. “Meeting people from Amgen and other scientists through the program – seeing their career interests and how they thought about things – really opened my eyes to the different possibilities out there other than academia.”

At Stanford for graduate school, Gee worked in Christopher Garcia’s immunology lab. Dr. Garcia had been working for nearly a decade on new technology to identify targets that the immune system can recognize to kill cancer cells. Inspired to continue working on immunotherapies for cancer, Gee co-founded 3T Biosciences along with Leah Sibener, who was also in Garcia’s lab, and VC (now CEO) Luke Lee, using Garcia’s core technology to identify novel targets. “It was a unique opportunity for me to be able to work on something in an academic lab and make some valuable discoveries that allow the technology to be marketable in the biotech world,” he says.

Starting a new company was a whole new world, Gee says. He was used to only thinking about the science, so it was new for him to think about the business side: marketability, the need, the consumer, and the actual product itself. He quickly learned that building out a well-rounded team was key to having a successful company. “You need to find people who really understand the science but also have expertise on the business side, to see where the value comes from the research to translate into a marketable product,” he says.

Having the entire cofounding team recognized in Forbes was particularly important for Gee, especially the role of their female co-founder Sibener. “It was great that in the process of being highlighted, we also had the ability to promote women in science.”

The company is going after “prize targets” in immunotherapy, such as self-antigens and neoantigens, that will target cancer cells specifically and not normal tissue. “With the technology we have, we can really identify novel targets that can be extremely beneficial for the field,” he says.

Among Caltech undergraduates who David Baltimore has worked with, “Marvin Gee stood out for his commitment, intelligence, and effectiveness as an experimental scientist,” Baltimore says. “It was not a surprise to me that Marvin did superb work as a graduate student at Stanford but for him to be chosen on the 30-under-30 list recognizes both his prowess in science and his entrepreneurship, saying that he is on the takeoff platform for a great career.”

Gee’s advice to Amgen Scholars is to continue to work on what they are passionate about, whether in science or not. He also notes that the research process can be challenging, especially in graduate school: “The most difficult thing is that you’re in a program where the goal is to discover something new. At the core, that is not an easy thing. It’s incredibly difficult. You run into a lot of problems where you don’t what you’re supposed to be doing and might not have right answer.” But if you persist, you just might solve that puzzle one piece at a time.