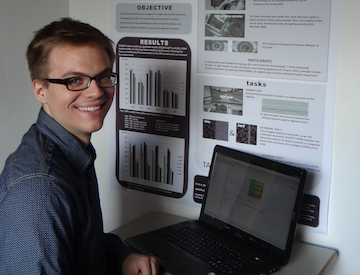 In 2009, Bartosz Helfer was well into earning his bachelor’s degree in cognitive sciences at Adam Mickiewicz University in Poznań, one of the biggest universities in one of the largest cities in Poland.

But even so, Helfer didn’t have much of an opportunity to try hands-on research. The university’s cognitive sciences program was new—his student cohort was among the first—and it emphasized theoretical rather than applied research.

When Helfer heard about the Amgen Scholars Program at the Ludwig-Maximilians University in Munich, he jumped at the chance to apply. He got accepted into the 2010 Program to work with the group of his top pick, that of Stefan Glasauer, who studies human-robot interaction.

“[Research] was totally new for me at the beginning,” Helfer says. But he fell into it the daily work easily, learning to operate a motion-capture device and computer programming. His Amgen Scholars summer research helped contribute to a study published June 27, 2012 inPLOS ONE.

For his project, Helfer studied how observing another person or a robot facilitates or interferes with one’s own movement. It’s known that people observing an individual performing a motion are better able to imitate that motion. For example, when a class watches its aerobic instructor doing a side lunge, the observers in the class can better mirror that move. That’s called motor facilitation.

In contrast, the class would have more trouble executing the side lunge if the instructor did something different — say, a forward lunge. That is called motor interference, and it means that the people in the class would vary more in the trajectory of their own side lunges. (Scientists think that a specific type brain cell—dubbed ‘mirror neurons’—underlie the ability to understand and copy others’ actions and may also play some part in motor interference.)

But what happens if the one being observed is a robot instead of a human? For the new study, a group of 33 individuals watched a video of one of three robots—each with different joint configurations that made them more or less human-like—or another person performing a simple motion.

When subjects were asked to do a movement different than the one they were observing, motor interference was stronger in the group that was watching the more human-like robot compared with the other types of robots. That suggests that humans are able to understand the motor actions and intentions of a robot when it has a more human-like configuration.

“In the broader sense, this is important for understanding how we humans understand artificial beings,” such as robots used in health care and in other industries, Helfer says.

His summer with the Amgen Scholars “was the initial spark that led me to LMU for a master’s degree in neurocognitive psychology,” Helfer says. He worked in Glasauer’s group to build on his Amgen Scholars project, before branching out to try research in two other cognitive neuroscience groups, and learning a range of different brain imaging techniques through his coursework. “I was just curious and I’m still curious about science and how things work. I would like to learn as much as possible,” Helfer says.

For his master’s thesis, Helfer is helping conduct an overview of meta-analysis comparing the efficacy of pharmacological treatments for psychiatric disorders. He is working with Stefan Leucht, associate professor of psychiatry and psychotherapy at the Technical University Munich.

Helfer will graduate this summer, and hopes to land a spot in the neuroscience PhD programs he applied to in Munich and in the United States. His chances already look good: Leucht says, “He’s one of the best students I’ve had. I would like to have him as PhD student — there’s no doubt about that.”