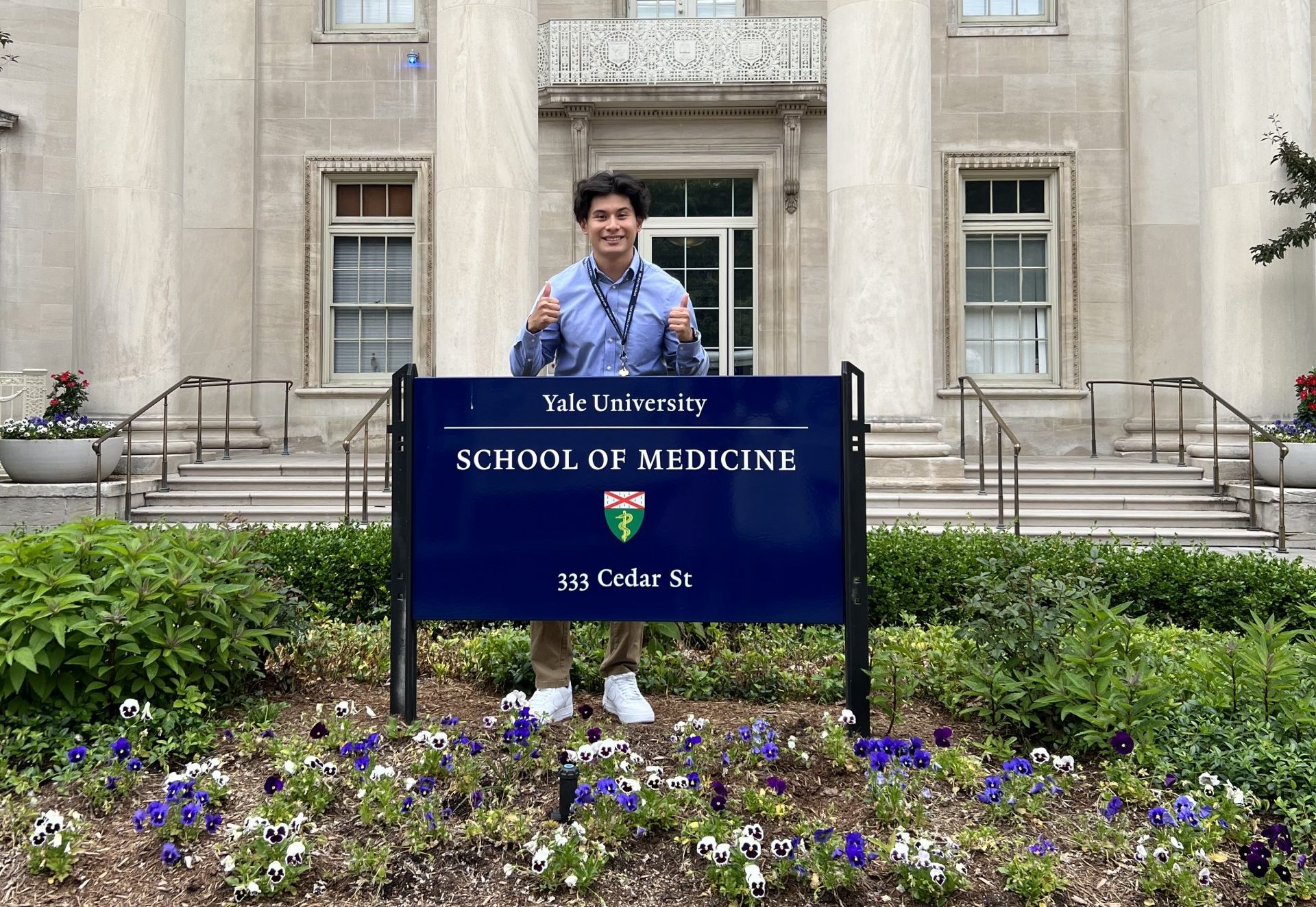 Joshua Lazaro’s passion for using science to help others not only guided him through high school and to research experiences in college such as the Amgen Scholars Program but also helped guide his family years before: Lazaro’s demonstrated excellence in school and commitment to research helped spare his father from deportation when Lazaro was graduating from high school.

“I remember the judge in the case asking if I wanted to go to college,” he recalls. “And I said ‘yes, I do. I want to work in environmental science and public health.’ And that, combined with my leadership in high school and academic record — including the colleges I had gotten into — led the judge to say ‘clearly your parents have had a foundational role in your life and deserve to stay, and your siblings need them here to keep guiding them.’”

Prior to that moment, Lazaro (pictured at Yale above) did not see college in his future. If his father were deported, he planned to return to Mexico with him. But that moment changed everything.

Four years later, Lazaro completed his Amgen Scholars summer at Yale University and will graduate in the spring from the University of Texas at San Antonio, after which he plans to go to graduate school. His focus is using bioinformatics and data to help shape public health decisions related to pollution. An early inspiration for this research was time he spent in Mexico City as a child, where he saw the effects of air pollution on family and friends firsthand.

Lazaro’s journey has come full circle in many ways, as he was introduced to the Amgen Scholars Program and other research opportunities through a mentor he met while Lazaro himself was mentoring young students at a San Antonio-area high school. Lazaro was drawn to volunteering to help those who might have grown up as he did without real mentors. “Growing up in Magnolia, Texas, I didn’t really have that many mentors,” he says. “I only spoke Spanish, and I didn’t really have anyone to talk to other than my parents. So it was exciting for me as a first-generation college student to mentor someone in Spanish who had similar experiences to me. And it was really fun.”

The mentorship was part of a pen-paling program organized through a student group at the University of Texas at San Antonio when most activities were virtual due to the COVID-19 pandemic. Through the student group he met Justin Guerra, who would end up recommending both a Stanford summer research program Lazaro would do the summer after his sophomore year, as well as the Amgen Scholars Program, which Lazaro would do the summer after his junior year. Guerra not only made Lazaro aware of the programs; he also provided guidance to Lazaro throughout the process. “Through his mentorship, Justin helped me develop my thoughts about how my interests in environmental science could translate to biomedical research,” Lazaro says.

An Amgen Scholar alumnus himself, Guerra shares an interest in bioinformatics with Lazaro. He has applied his data science skills to a range of topics within cancer research. Participating in the Amgen Scholars Program at Washington University in St Louis in 2019, he says, gave him more depth of knowledge in the biosciences – knowledge that he is now using as a research technician at Massachusetts General Hospital.

But perhaps what stuck with Guerra most from the experience was the camaraderie among fellow Amgen Scholars. He has both stayed in touch with Scholars from his cohort and brought new researchers into the fold through his mentorship of Lazaro and others — driven to continue building community among young scientists, especially through the COVID-19 pandemic. “I was seeing . . . a lot of students getting frustrated, and I wanted to be able to help them feel engaged in science and research and to continue their paths, whether to graduate school or beyond,” Guerra says.

Although Lazaro and Guerra’s mentor-mentee relationship has grown into more of a friendship, Guerra continues to help guide Lazaro as he navigates the graduate school application process. They recently saw each other in San Antonio after Lazaro returned from his Amgen Scholars summer at Yale. Lazaro now has other mentors as well, including his mentor from the Amgen Scholars Program who explained to him how to get fee waivers for the applications, something “really helpful, especially as a low-income student.”

Every day for Lazaro feels like a surreal dream. In addition to his Amgen Scholars research at Yale, Lazaro worked at a clinic in New Haven that serves immigrants or undocumented people. “I was able to use my Spanish skills to help out another community and be the middleman between the doctor and the nurses,” he says, as well as to conduct data-driven research on how time in the clinic affected patients’ blood pressure measurements.

“Four years ago, I wasn’t even planning on going to college because of my father’s deportation case,” Lazaro says. “I’m the first in my family to go to college, and I did research at Yale University. I can’t believe I actually went there. The community there was phenomenal.”