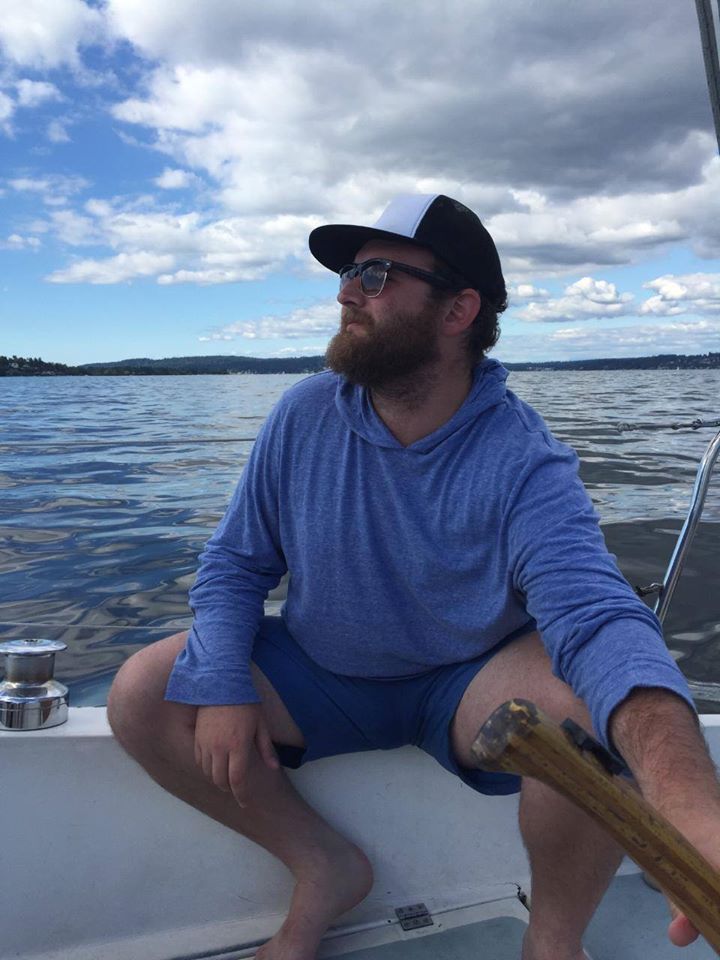 Growing up in Thousand Oaks, Calif., only a stone’s throw from Amgen’s headquarters, definitely had an impact on Robert Lamm. “I knew friends’ parents and some extended family who worked for Amgen,” he says.”I would bet that influence made me more aware of biotech than the average 18 year old applying to college.”

But for this Amgen Scholars Program (ASP) alumnus, the main drive in his pursuit of science has always been his love of exploring puzzles and gadgets with his family. “My mom always loved puzzles. Jigsaw puzzles, number puzzles, word scrambles, Rubik’s cubes, you name it, she did them,” he explains. “And my dad is Mr. Fix-it. For as long as I remember, he has taken maintenance of everything in our home into his own hands. At 71 years old, he recently replaced the motor that raises and lowers the window in our 1997 Ford Crown Victoria! I love tackling puzzles, I love learning about and understanding how things work, and I do my best to have fun along the way.”

This drive has guided him through academia and into the startup world, where, eight years after Amgen Scholars, he is now a scientist on the chemistry team at Dantari, Inc. There, he is leveraging the skills he gained working on targeted therapeutics and drug delivery systems during his Ph.D. research to contribute to the development of a platform technology for delivering drugs to challenging targets.

ASP spoke with Lamm to learn more about his move to industry, his memories from the Amgen Scholars Program, and what it’s like working at a startup.

ASP: First, how are you doing in this pandemic?

Lamm: Thank you for asking! I’m currently sheltering in place, or following Stay Well at Home as they have called it here in Ventura County, with my father. It’s been our first time working from home together which posed some challenges, but we settled into a rhythm within a few days. I had to move out of the kitchen or else the refrigerator would have been empty by the end of the week!

I’m grateful to be in a position where being productive while working from home is an option; for many this is not the case. It is incredible to see how much of the research community is impacted by the pandemic. Having moved back down to Southern California from Seattle about a year ago, I have been in contact with friends at University of Washington (UW) and most research has stopped. This isn’t specific to UW either, as academic institutions and entire industries across the United States are shut down. This has forced a lot of people to make tough decisions about balancing productivity and health.

ASP: What role has the Amgen Scholars Program played in your career?

Lamm: I participated in Amgen Scholars in the summer of 2012 as a member for Daniel T. Kamei’s lab in the Bioengineering department at UCLA. I started working in the Kamei lab spring quarter of my sophomore year and continued in the lab through my senior year. In the Kamei Lab, I worked with a graduate student who now has her Ph.D., Dr. Kristine Mayle, on novel drug delivery systems for treating prostate cancer – taking drugs that already exist and improving their ability to treat disease using the same types of materials as in plastics. My first year in the lab prepared me for the opportunity that Amgen Scholars provided, which was to have an independent project in the lab. I evaluated a new component of our delivery system and highlighted the strengths and shortcomings of the solution I chose as well as the alternatives. This work was even published in UCLA’s Undergraduate Research Journal!

The guidance of my mentors, Dr. Kamei and Dr. Mayle, as well as my experience with an independent project solidified my decision to apply to Ph.D. programs.

ASP: Where did you go for your graduate studies?

Lamm: I was fortunate to get into University of Washington’s Ph.D. program and into the lab of Dr. Suzie Pun where I would continue working on biomaterials solutions for problems in healthcare. During my time in the Pun Lab, I honed skills I learned while at UCLA and gained many more. While developing a biomaterial that promotes clotting as a treatment for uncontrolled bleeding, I presented at national and international conferences, helped write successful grant proposals, and published my first first-author research publication.

ASP: How did you get into the startup world?

Lamm: In December of 2016, about two years before I’d finish my Ph.D., I was eating burritos with my friend David Younger after a day in the lab. “Are you interested in business?” he asked. My answer was something along the lines of “not particularly, but I’ll hear you out…”. My first few years in grad school I was confident that afterward I’d be doing post-doctoral studies on my way to applying to faculty positions, but throughout my time in Seattle I was exposed to a wide variety of career paths for science Ph.D.s. Some were very exciting to me, although I admit entrepreneurship was not on that list.

David was interested in commercializing his thesis work, of which I was both familiar with and a fan. He convinced me to work with him in preparing for a poster and pitch contest, and after that to participate in UW’s Business Plan Competition. David, with little help from me, won that poster and pitch competition. With that momentum we dove headfirst into the business plan and formed A-Alpha Bio.

With little formal training and a lot of lessons from those in our network, we learned how to understand our product, market, finances…and lost the competition in the Sweet 16. We took the following year to get funding for our project, participate in UW’s Jones+Foster Accelerator, and grow our team, notably adding Randolph Lopez. Over the following year, we won both UW’s Health Innovation Challenge and the Business Plan Competition, and David, Randolph, and I defended our Ph.D.s.

The easiest way I would describe startup life is: never boring. It is a cliché, but on a small team everyone has to do a little bit of everything.

ASP: What are you doing now?

Lamm: In August 2018, I made the decision to  move back to Southern California once I wrapped up grad school later that year. My mom, who had suffered from chronic pain for about a decade due to back issues, was being able to do less at home, and my father had been diagnosed with metastatic melanoma in January 2017. While I left A-Alpha Bio, I am in close contact with my friends and they are doing really great things in Seattle! It was shortly after moving home that I got the opportunity to join a promising biotech, Dantari, in Southern California. I joined as the 5th member of the team last year, and we’re growing quickly as we develop a platform technology for delivering drugs to hard-to-treat targets.

ASP: What was it like being part of a startup?

Lamm: The easiest way I would describe startup life is: never boring. It is a cliché, but on a small team everyone has to do a little bit of everything. Through my time at A-Alpha Bio and Dantari, I’ve been exposed to far more aspects of a company than I would have in academia or a larger company. As someone who enjoys learning and doesn’t mind feeling a little in over my head sometimes, startups have been a great environment to grow quickly.

ASP: What has been the most exciting thing coming out of your current work?

Lamm: For me, the most exciting thing about working at Dantari is applying my experience in drug delivery to a platform that is moving quickly toward clinical programs. I spent my academic research career working on biomaterials and synthetic drug delivery systems and there is not a large number of FDA-approved treatments currently from this field, largely because the concepts are new. That also means that there were not a lot of opportunities to continue research in the field in industry. The ability to work on a platform that leverages the skills I gained in the Kamei and Pun Labs is awesome.

ASP: What’s your favorite memory from or part of the Amgen Scholars Program?

Lamm: My favorite memory from Amgen Scholars is the camaraderie of the cohort! Nearly 10 years later (time flies!), I am still in contact with a handful of folks from the program and, with social media, I see updates from many more. It was the ultimate science summer camp, and I look back fondly on getting together for breakfasts and dinners (when we weren’t skipping to work early or late in the lab), late night basketball games, and the whole crew living in the dorm.

My favorite science memory is my group meeting at the Kamei lab after a productive summer. This was my first independent project in the lab and sharing my data with the group was a proud moment and cemented my desire to pursue a Ph.D. after undergrad.