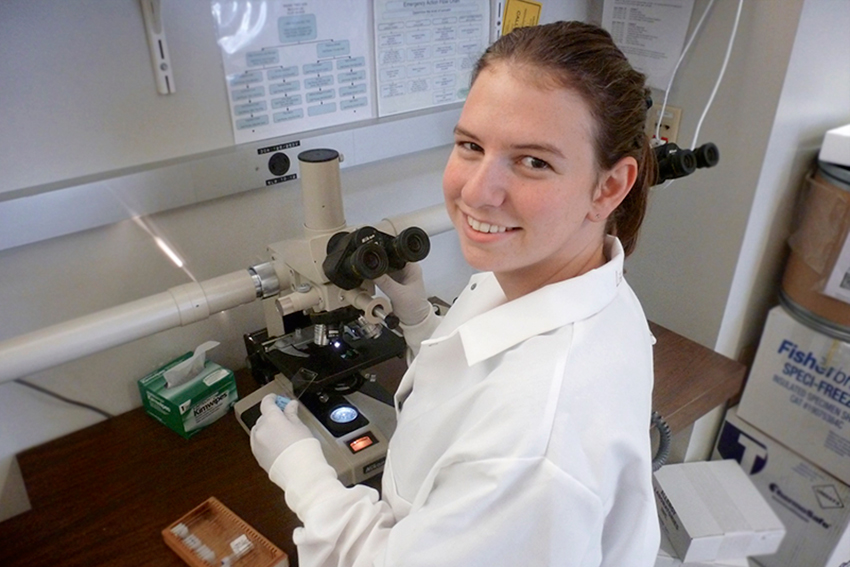 When Elisabeth Krow-Lucal started college at the University of California, San Diego in 2005, she thought, “Wouldn’t it be so cool to work in a lab that studies the bubonic plague or another infectious disease that changed the course of history?”

She wound up in a research group that studies a close relative of the bacteria Yersinia pestis, which causes bubonic plague. Although history had sparked her choice, Krow-Lucal’s daily work in the lab focused on current pressing health problems. She studied the mechanisms of listeriosis infection – the deadliest foodborne illness in the United States, which is caused by the bacterium Listeria monocytogenes. The experience gave her an itch to study other diseases, such as AIDS, malaria, and polio, affecting the world at large.

As a 2007 Amgen Scholar in Shane Crotty’s lab at UCSD, Krow-Lucal’s project aimed to understand how the body responds to different kinds of vaccines with the eventual goal of making them more effective.

Because her particular project — constructing a recombinant viral protein that would mimic the immune response elicited by the rodent-borne infection lymphocytic choriomeningitis — wasn’t what the lab had done before, she built the project from the ground up. “It was a great experience, and I learned tons of different techniques,” as well as how to present scientific research, Krow-Lucal says.

Krow-Lucal’s research experiences, as both an undergraduate and graduate student, and her field work in remote and poverty-stricken places have solidified her commitment to global human health.

Now a fourth-year doctoral student at the University of California, San Francisco, Krow-Lucal took last summer to do community-based research on HIV in Kenya for a public health fellowship offered jointly by UCSF and the University of California, Berkeley. She and her colleagues investigated risk factors for HIV infection in fishing communities, access to healthcare, and whether social support networks affected how likely people were to reveal to others that they had AIDS.

Where Krow-Lucal spent her summer in Kenya, an estimated 40 percent of the population has AIDS, but most people are more worried about their next meal than they are caring for the disease, Krow-Lucal notes.  The average life expectancy there is 40.

About finding a cure for AIDS and other diseases, “there’s a feeling of urgency,” Krow-Lucal says. “It’s all very nice when we go home to our houses that have electricity and our food that’s nutritious and healthy. Other people don’t have that same kind of time.”

Working with Joseph “Mike” McCune, Krow-Lucal is studying maternal-fetal transmission of HIV. For many years, it has been clear that the transmission rate is surprisingly low — 10% — even though maternal cells (and likely HIV) can readily traverse the placental barrier between mom and fetus.

If the scientists can figure out what about the fetal immune system makes it resistant to HIV, then they might be able to understand how other diseases, such as allergy and asthma, develop in early childhood, or why some kids mount robust immune responses to vaccines whereas others don’t.

In one aspect of her project, Krow-Lucal is probing gene expression patterns in fetal and adult cells to come up with a signature of how ‘fetal’ or ‘adult’ their immune systems are, with the ultimate hope of predicting how a person’s immune system will respond to vaccines and pathogens.

After graduation, Krow-Lucal plans to do postdoctoral research in public health that involves a combination of bench and field work in developing countries.

McCune calls Krow-Lucal an inquisitive and thoughtful collaborator. An indication of her brilliance, Krow-Lucal’s qualifying exam, written on the way the human immune system develops, was repurposed into a successful R01 grant project proposal for the National Institutes of Health. She is “a wonderful scientist,” who has a successful career ahead of her, McCune says.