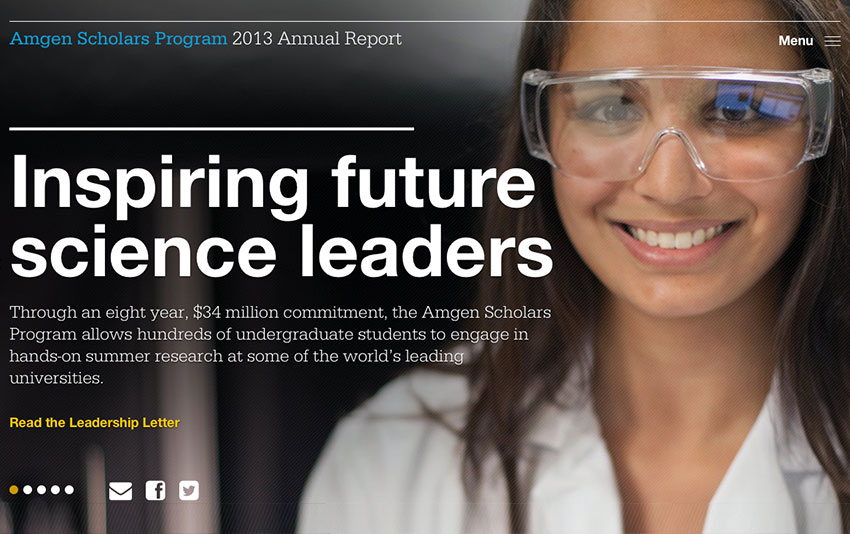 2013 marked the seventh year of the Amgen Scholars Program and success for its participants from both past and present. In the summer of 2013, the Program welcomed 331 enthusiastic and talented undergraduates into research labs at 13 leading host universities across the U.S. and Europe. The students conducted independent, hands-on research for 8 to 10 weeks under the guidance of leading faculty researchers. With help from multimedia and interactive tools, the Program’s new 2013 Annual Report tells the stories of these motivated individuals.

Meet a few of the 2013 Amgen Scholars, alumni and faculty mentors through their profiles within the report:

Professor Randy Schekman, an Amgen Scholars faculty mentor at the University of California, Berkeley, who won the 2013 Nobel Prize in Physiology or Medicine for his fundamental work showing how proteins move within cells and are secreted.

2013 Amgen Scholars join the growing ranks of alumni, many of which complete the Program — funded by a $34 million commitment by the Amgen Foundation to inspire and prepare a new generation of scientists —with their sights set on graduate school. And, in fact, several Scholars from the first cohort in 2007 have already earned their PhDs and are looking ahead to life after graduate school.

One aspect of the Amgen Scholars Program that distinguishes it from other summer research programs is its two-day symposia held in the U.S. in California and in Europe in Cambridge. Scholars meet to hear firsthand from academic and industry leaders and learn more about the careers available to them. More information about the 2013 symposia, as well as interactive maps showing the home school locations of all 2013 Scholars, is included in the report.