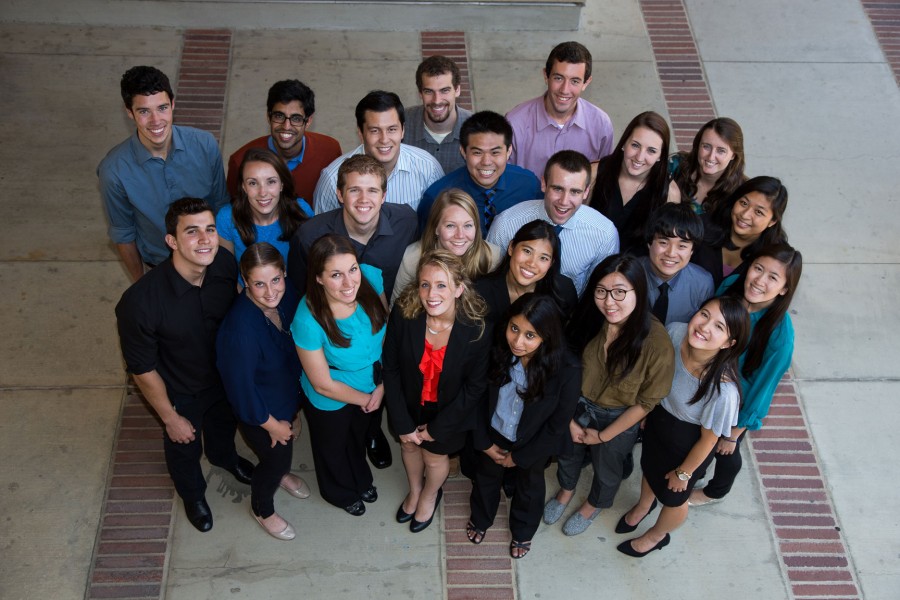 Late on a Friday afternoon, the fifth floor of the Engineering V building on the University of California, Los Angeles, campus is still teeming with signs of student life: the smells of reheated lunches waft through the shared office space; students hunch industriously over their microscopes in the imaging room; and people shuttle back and forth between benches in individual labs.

It’s in this building where four 2013 Amgen Scholars spend the summer learning the ins and outs of scientific research.The undergraduates—Elyse Harnett, Stephanie Wang, Jason Kerr, and Dewal Gupta—are also sewing the seeds for professional networks that they will grow and benefit from for years.

“Our set-up is different from other buildings where most research labs have their labs and then their desk space in one,” says Wang, a senior in bioengineering at UCLA who works with faculty mentor Daniel Kamei. “We all have our own labs, but also a common community office space that’s shared amongst four labs.”

Research in the four groups—led by Kamei, Benjamin Wu, Dino Di Carlo, James Dunn—runs the gamut, from using engineered proteins to improve the targeted delivery of therapeutics, to repairing lost or damaged tissues through bioengineering, to making new miniaturized diagnostic and research tools.

As simple as it seems, the rows of rust-colored cubicles and the abundance of seminar rooms cultivate crosstalk between the diverse labs. From that comes practical help troubleshooting experimental obstacles, Wang adds.

For example, Wang’s project aims to improve the detection of toxic proteins and other chemical agents used in warfare. She was trying to create magnetic nanoparticles for improving the sensitivity of an available, low-cost technology but couldn’t make the particles consistent enough in size.

Because her graduate student mentor worked near a colleague from another lab who uses the same materials—which were commercially available, it turns out—Wang was able to borrow them to see whether they would work.

Besides making it easier to trade and share materials, having such common spaces and seminars “makes collaboration much easier,” says Scholar Elyse Hartnett, a senior in chemical engineering from the University of Massachusetts in Amherst, who works in Ben Wu’s group. Wu, for instance, has an ongoing collaboration with Dunn to identify molecular markers for identifying adrenal cortical progenitor that can be used to treat adrenal gland diseases. Wu has also published with Kamei.

Even on the days when they’re away from their desks and fully absorbed by bench work, the Amgen Scholars of Engineering V see each other, along with other Scholars, in the professional development part of the program.

Coordinated by the program’s leaders, the biweekly sessions cover how to get into graduate school, individual feedback on curriculum vitae, and what grad school life is like.

Scholars also attend lectures given by top researchers about ongoing research in their labs.  For example, Anna Wu, professor of molecular and medical pharmacology, described how specific antibody fragments can be used in cancer imaging and Amander Clark of the department of molecular, cell, and developmental biology, talked about genetic pathways critical for normal human germ cell differentiation and function. Virologist Benhur Lee explained transmission events that led to outbreaks of Henipaviruses, which inspired the movie Contagion.

This year’s Scholars also see each other in their free time. They live in the same student housing, “which is nice because now you’re living with other Scholars and always interacting with them,” Harnett says.

Half of the two dozen in the cohort attend UCLA as undergraduates, and are able to show the other half—visiting students from schools such as Boston University in Massachusetts; Rutgers University in New Brunswick, New Jersey; Hofstra University in Hempstead, New York; and Drexel University in Philadelphia, Pennsylvania—Los Angeles and other cities in California.

“I never felt like a visiting student; it always felt like home,” Harnett says. Conversely, says Wang, the UCLA students get to experience their campus and surrounding area through the eyes of a newcomer.

Program leaders plan outings for the Scholars— like the Aquarium of the Pacific and Universal Studios — but the students also plan their own trips. They go hiking to the Hollywood sign, go to the beaches, visit the Los Angeles County Museum of Art and the Getty Center, and explore the local cuisine, including Diddy Riese cookies and Korean barbecue from Koreatown.

Although the Amgen Scholars Program at UCLA lasts only 10 weeks, the relationships within the cohort and the laboratories will continue to grow. “The Amgen Scholars Program [is] an excellent opportunity to network with professionals in my field, as well as make the type of connections with my Amgen peers that I know will last a lifetime,” Harnett says.