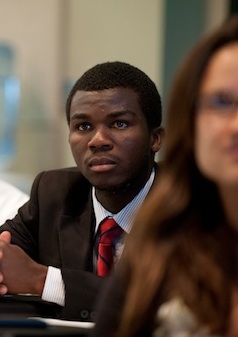 At Columbia College in Missouri, Ambima Buzhyason has learned scientific techniques in his undergraduate laboratory classes, such as genetics, microbiology, and chemistry, but he has never tackled his own project. As a 2012 Amgen Scholar at the University of California, San Diego, he got his chance.

“The Amgen Scholars Program is one of a kind,” he says. “I am the luckiest person to work with my principal investigator and [postdoctoral] mentor.”

A native of Nigeria, Buzhyason has long dreamed of being a scientist. He started reading and speaking English at the age of 5, which was uncommon where he grew up. His early reading ability helped him get into “Special Schools,” a system of government-run educational institutions that focus on the sciences. The first from his local community to get in, Buzhyason left home at 12 years of age and has lived away from his family since, returning only for vacations or during illness.

Although it was difficult to live away from home, the experience opened Buzhyason’s eyes to physics, chemistry, and math, and he wanted more. “I’m detailed and analytical,” he says. “I think science offered me the chance to be the best I can be.”

Hoping to set an example for his four younger siblings and others in his community at home, he moved to the U.S. to attend Columbia College, where he is a dual major in chemistry and biology. Although his family is educated, Buzhyason is the first in his family to attend college and first in his hometown to study abroad.

A brief description of von Herrath’s work on his lab website — in particular, the progress the team has made finding a cure for type 1 diabetes — drew Buzhyason to the group. Type 1 diabetes is an autoimmune disease that leads to the death of insulin-producing (beta) cells in the pancreas. The lab is working on several different approaches to save beta cells, in part because the current treatment for diabetes — insulin replacement — is far from ideal. “[Von Herrath’s lab] caught my attention because what they’re doing has a wide range of applications and huge implications for type 1 diabetes and other autoimmune diseases,” Buzhyason says.

For his project, Buzhyason worked on a combination approach to reverse type 1 diabetes: a DNA vaccine that activates the immune system’s regulatory “peacekeepers” to protect beta cells and an antibody that blocks inflammatory pathways.

Over the course of the summer, Buzhyason picked up a number of techniques, including tissue sectioning and immunostaining, polymerase chain reaction (PCR), statistical analyses, and even flow cytometry. He kept learning methods even in his last week as an Amgen Scholar, after he had already turned in results from his project.

Buzhyason’s eagerness to learn is one of his best qualities, says his mentor Philippe Pagni, a postdoctoral researcher in von Herrath’s group. His first week in the lab, for example, he asked to borrow some books on virology, and after reading them asked relevant questions, especially for a newcomer, says Pagni.

In addition, Buzhyason did not give up when he couldn’t get his PCR to work, Pagni says—an important lesson that every young scientist learns is that many experiments fail.

After he graduates in the fall of 2013, Buzhyason plans to pursue a PhD in virology and immunology, or chemical engineering. In the meantime, he will work on proposing an independent project to earn an honors thesis at Columbia College. He also plans to apply to other summer research programs in Austria, Ireland, and England.