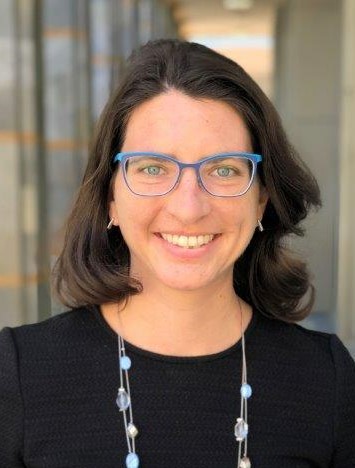 Taylor Lenton has had a lot of full-circle moments in her career. An Amgen Scholar in the first year of the program at Caltech in 2007, she is now working at Caltech as director of corporate partnerships, and, along the way, she has worked at Amgen, among other places.

“What’s driven every decision within my career is a desire to learn something new, something different,” she says. “I’ve never felt like I could commit to one specific research area for the rest of my life, because there are so many things that interest me. But when you zoom back to see the big picture, there are clearly some areas that I’m drawn to, and some companies and institutions that feel like a really good fit.”

For Lenton, it’s all about understanding how new innovations in science make it out of the lab. In her current role at Caltech, Lenton works to connect researchers at the university with industry through funding, collaborations, and long-term partnerships with companies. “We are working to bring industry and academia together to benefit the science that’s happening in academia,” she explains.

Lenton’s scientific interests first intensified in high school in Southern California, where she had two wonderful chemistry teachers. Those experiences led her to pursue a chemistry degree at Wellesley College, on the other side of the country. There, she also had a formative experience with an organic chemistry course. “The professor, David Haines, has since retired, but he is one of those people who inspired a generation of scientists. He really encouraged people, including me, to follow science in a way that made sense for them,” she says, “whether that was going to graduate school, getting a job in industry, teaching, or even going to law school.”

Around the same time, she participated in the Amgen Scholars Program at Caltech. “Amgen Scholars was great,” she says. “It was the first year of the program, and everyone was working really hard to make sure that it was a success. There was a lot of camaraderie among the cohort, regardless of what lab or field you were in.” She especially remembers touring the Amgen campus in Thousand Oaks and being amazed by the labs and facilities. The hands-on summer research experience solidified her interest in pursuing a PhD in chemistry.

After Wellesley, she circled back to Caltech, again, this time as a PhD student studying organometallic chemistry with John Bercaw. “Caltech keeps drawing me back. I can’t get away,” she jokes.

While pursuing her PhD, Lenton says she realized she did not want to do bench science in the long-term. After obtaining her PhD, she joined Intel’s Rotation Engineering Program, a technical and leadership program for recent graduates where she could pursue various roles within the company. Through that experience, she found a key set of questions that drive her to this day: “How do technical products make it to the marketplace? What is the development process? And how do we make those technologies accessible to people?”

Lenton then pivoted into the business side of Intel, doing “market forecasting” to understand where semiconductor technology and the marketplace was heading. She went on to work in forecasting, data analytics, and market research at Gilead Sciences and then at Amgen. She remembers that when she started at Amgen, another Amgen Scholar had just started a couple weeks before her.

“When you’re doing research, especially early in your career, it can be hard to feel like you’re successful. This is something that everyone probably feels to some degree. In that moment, think about where you were two months ago on the same project and what you’ve learned since then. If you know more than you did, even if that knowledge is about something that didn’t work as expected, you’ve experienced success.”

She continues to work with Amgen, among many other companies, in her role at Caltech now, which she started in the fall. Working on corporate partnerships, Lenton has a birds-eye view of innovative science across disciplines at Caltech. One trend she sees is the ever-growing role of data science and machine learning across disciplines, including not only traditional disciplines like mathematics and engineering but also chemistry, biology, and behavioral sciences.

Upon reflection, Lenton says that she always suspected that she would take a more non-traditional career path. “One of the things that has surprised me is how many PhDs I’ve met along the way who have also followed less-traditional career paths,” she says. Through that lens, she has seen commonalities among people with PhDs, especially a willingness to solve problems even in the face of ambiguity.

The biggest lesson she took away from her research path was perspective on success. “When you’re doing research, especially early in your career, it can be hard to feel like you’re successful,” she says. “This is something that everyone probably feels to some degree. In that moment, think about where you were two months ago on the same project and what you’ve learned since then. If you know more than you did, even if that knowledge is about something that didn’t work as expected, you’ve experienced success.”