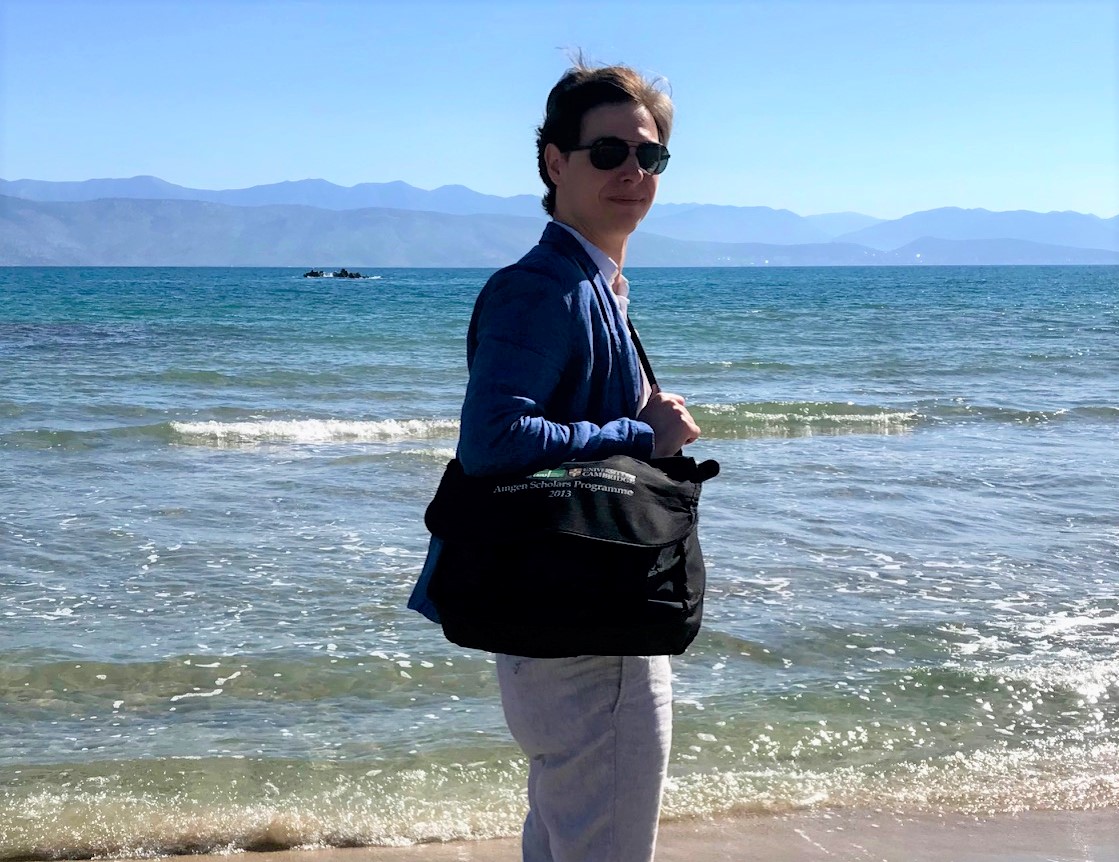 The path from Amgen Scholars to working at a major pharmaceutical company has been anything but linear for Jan Botthof. Between his undergraduate work, PhD program, and now as a trainee in the International Future Leadership Program for Product Supply at Bayer, Botthof has taken time to try different roles and figure out the best balance of science in his career. Through his journey, Botthof has learned that many career options are available to those with science skills that go beyond traditional benchwork.

Botthof grew up in a small town in Austria. While working to bolster his English skills, he got hooked on books by Richard Dawkins, which introduced him to the world of biology. When he was 16 years old, he had the opportunity to spend time in a lab through a summer research program. “I was able to do proper lab work, stuff I actually later used, even in my PhD work,” he says. “That was the real moment when I realized I wanted to pursue a career in science.”

As the universities in Austria were underfunded for scientific research, Botthof set his sights on colleges in the UK. The challenge was although his English was strong, his teachers in Austria lacked the English skills. “I had to help them with writing my reference letters, which was awkward,” he says. But, he succeeded and headed to London to pursue a degree in biochemistry at Imperial College. “Moving to London from Austria at age 18 was very exciting and transformative,” he says.

The second summer of his undergraduate experience, Botthof participated in the Amgen Scholars Program at the University of Cambridge, doing cancer research in the lab of Nick Coleman. “Oddly enough, my flatmate, Jack Supple, also got into Amgen Scholars through Karolinska,” he recalls.

The Amgen Scholars Program completely changed how Botthof approached problems, he says. “It taught me how to think as a scientist — how to ask the right questions and test those questions,” he says. “This is something I apply now in my life daily.”

Botthof would go on to pursue a PhD at the University of Cambridge in haematology, modeling a rare blood disease in zebrafish. But halfway through the program, he had a startling realization: While he enjoyed benchwork, he could no longer see himself continuing to do it for the long run. He had other interests he wanted to explore as well, including business and management.

He then set off to try new roles while finishing up his PhD and then in the year that followed. He tried consulting, he traveled, he applied to lots of different positions. In the end, he stumbled upon a leadership program through Bayer that focuses on applying scientific skills to product supply and management.

Now in his first year rotation in the leadership program in Berlin, Germany, Botthof is thriving. “Many of my colleagues have PhDs in fields like molecular biology, and we are learning a variety of issues, like what it takes to produce gene or cell therapies,” he explains. “I get to use a lot of the science from my PhD but it’s also a complete change because I am not doing research anymore; I am trying lots of different jobs.”

In the fall, Botthof will move to Leverkusen, Germany (the location of Bayer headquarters), for the second year of the rotation and then eventually to Berkeley, California, to complete the training. While he misses the connection to academia, he is enjoying learning about so many new facets of the pharmaceutical business, including regulatory work and quality control.

His biggest advice to those currently considering a PhD program is to find a supportive supervisor. He said that he underestimated the importance of that in his own path. “It’s not just about the science background,” he says. “You need to ask questions like: will this person be a good mentor? Does the lab have money for conference travel? Can I pursue the research I want within this environment?”

Travel has been a vital part of Botthof’s career — not only traveling from Austria to the UK to Germany for his education and career but also lots of other trips to international conferences, where he grew his scientific network. “Travel is really important for personal growth — you learn so much when thrown into new environments and cultures,” he says.

For those nearing the finish line on their PhDs, Botthof counsels to “try as much as you can.” Internships, new jobs, and travel, for example, are all great avenues to explore while you have the freedom to do so.