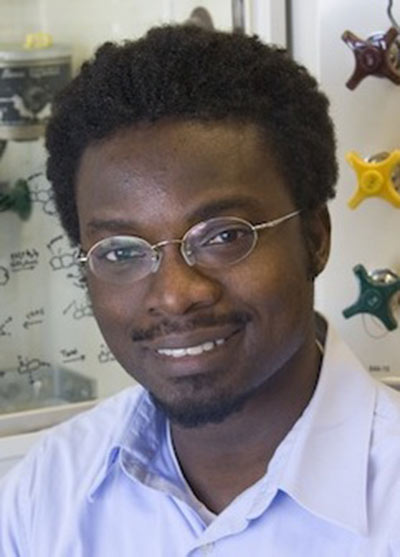 Amgen Scholar faculty mentor Richmond Sarpong, an associate professor of chemistry at the University of California, Berkeley, calls his students and postdocs “coworkers.” The Amgen Scholars and others who join his lab work with him, not for him, he says.

That team mentality made an impression on Christopher Marth, who came to Sarpong’s lab in 2011 as a graduate student after working with him as a 2010 Amgen Scholar visiting from the University of Florida in Gainesville. “He’s really a great mentor,” says Marth. “I appreciated that he treated me like an independent researcher.”

Sarpong’s interest in science and medicine took root in West Africa. His mentoring style comes from his own advisers who have also influenced his career path.

As a child growing up in Ghana, Sarpong saw the power drugs had in eradicating disease when his father, a medical doctor, worked with the pharmaceutical industry to make a medicine available to millions of people suffering from river blindness, a parasitic disease caused by infection by roundworms. Later, he became interested in pursuing a medical degree after he moved to Zambia and Botswana and witnessed the AIDs epidemic ravage the communities where he lived.

As a pre-med undergraduate at Macalester College in St. Paul, Minnesota, unsure about whether he would ultimately pursue medicine or chemistry, Sarpong took classes and worked with then-new assistant professor Rebecca Hoye. That experience crystallized his interest in chemistry and graduate school. “She was extremely encouraging—very much a cheerleader. That made an indelible impression on me,” he says.

From Hoye, Sarpong learned that being a scientist in academia was not only about making new discoveries and teaching but also about getting to know people on a personal level and encouraging their dreams. “I believe that a big part of what we leave behind is not necessarily the science but also the people who you influence and what they go on to do,” Sarpong says. (Four out of the five Amgen Scholars Sarpong has mentored have gone on to graduate school at prestigious institutions.)

In fact, each of Sarpong’s past mentors has made him into the scientist he is today. Martin Semmelhack, whom Sarpong worked with as a graduate student at Princeton University in New Jersey, taught him to maintain balance between his professional and personal pursuits. When he joined Brian Stoltz (another Amgen Scholar faculty mentor) for postdoctoral research at the California Institute of Technology in Pasadena in 2000, Sarpong got to see firsthand how to build a lab and a new research program. “I could take a lot of those skills that I picked up and translate them to my group here at Berkeley,” he says.

At Berkeley, Sarpong’s team focuses on “molecule building”— in particular, on new ways to make complex compounds based on natural products and their derivatives.

His work has numerous applications, but Sarpong has shifted his focus to neurodegenerative diseases like Alzheimer’s and Parkinson’s, an area where despite large investments, success in understanding pathology and treatment has been limited. He sees opportunities to make small molecule probes to better understand the molecular underpinnings of cognitive decline.

What’s more, “if we can identify small molecules that we can perhaps stem or reverse the process of cognitive decline, that would be a real win,” he says. That’s a lofty goal, and it requires a team approach, he adds.

Since arriving at Berkeley in 2004, Sarpong has grown his team to 20, yet he manages to meet with coworkers once weekly to talk about their research progress and make suggestions about how to overcome any challenges they encounter as they carry out their reactions. Informally, he walks through the lab daily, and teaches by demonstration.

Sarpong’s presence and approachability were big reasons why Marth wanted to join his group for graduate school. “Some professors come around to see that you’re working,” he says. “Richmond is there for support.”