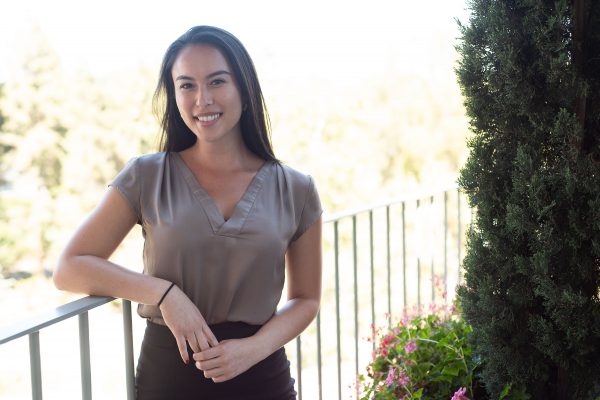 This Q&A is part of the Inspiring Islanders series.

ASP: Can you tell me a little bit about your research as an Amgen Scholar?

Folta: This summer, I was an Amgen Scholar at the National Institutes of Health. I was working at the National Cancer Institute in Dr. Suresh Ambudkar’s lab. The focus of the lab is on p-glycoprotein, which is a membrane protein on all cells capable of pumping out many different substrates from inside the cell. In cancer cells, this protein is over-expressed, meaning there are a lot more on the cell. This causes problems for cancer patients because this protein often will pump out anti-cancer drugs from the cell, making the cells resistant to treatment. My project with p-glycoprotein involved identifying more molecules that are able to be pumped out by the protein, as there are very many known, but new ones are being found frequently.

ASP: What has been your favorite part of the Amgen Scholars Program?

Folta: I think my favorite part about the program was my location at the National Institutes of Health, where the focus was on learning about health disparities in America. For me and many of my peers, health disparities are what got us interested in science and research.

Every week we would have a seminar on a specific topic, like maternal health disparities or addiction. After hearing from the presenter, we would spend the whole metro ride home discussing what we had learned and what we wanted to know next. It is a truly special thing to be surrounded by peers who are passionate about the same things you are and are active in their commitment to affecting change on current disparities in their career paths.

ASP: What has the transition been like moving from a small island for your high school education to a large campus environment in college?

Folta: I think that I did my best to make the transition as smooth as possible. I graduated high school in a class of about 45 people and went to a small liberal arts school, Pomona College, where the entering class is about 450 students. In the end, I had to choose between Pomona, small and on the warm West Coast, or University of Pennsylvania, large and on a coast that would make me have to deal with snowy winters. So, in a way, I chose to maintain certain aspects of familiarity while also pushing my comfort zone. I did this because while I knew I wanted to go to the mainland for college, I was terrified of leaving. I was raised to always put my family and community in the center. But when I left Guam, I didn’t have a sense of when I would be back, or how often I would see my friends and family.

ASP: Can you tell me about your experience learning science in high school in Guam?

Folta: I was extremely lucky to go to the only high school on Guam that offered an International Baccalaureate Diploma.  While I really enjoyed my science classes, something I noticed after coming to college was the difference in how they were taught. Many of my peers did weekly elaborate labs, created their own experiments, and did them in class. They understood the scientific process in ways that I did not. I left high school with an excitement about science, but no sense of what research entailed, or that it could even be a career option.

Folta: When I was younger, I was always playing outside catching tadpoles, lizards, and grasshoppers. I think that I have always been intrigued by “gross” things, like the fact that a gecko’s tail will continue to wiggle after it has fallen off.

But the real targeted interest started when I discovered human health and disease. I went on a medical mission to the Philippines when I was 16, and I saw some very extreme cases of what happens when something goes wrong in the body, and how it can get out of control without access to proper treatment. I wanted to understand what caused the manifestations of disease, but even more so, I wanted to know how to cure them in ways that were implementable in rural, low-income communities. I thought that there had to be a way to effect change on larger communities rather than one patient at a time. I didn’t even know that this meant being interested in research until 3 years later when I did my first clinically focused research.

Amgen Scholars gave me the opportunity to meet peers who are all excited about science – and for a range of reasons. We could all talk about the intersections between science, policy, and healthcare.

ASP: What are your goals for after undergraduate school?

Folta: After graduation, I plan to take a gap year away from academia to do more research. If possible, I would love to go home to Guam and spend some time there working in a clinic or volunteering at the hospital. After that, I plan on applying to MD/Ph.D. programs to pursue a career in academic medicine. My ideal career would involve both direct patient care, clinical research, and teaching medical interns and residents.

ASP: How has Amgen Scholars affected those goals?

Folta: Amgen Scholars gave me the opportunity to meet peers who are all excited about science – and for a range of reasons. We could all talk about the intersections between science, policy, and healthcare. Amgen Scholars has reminded me why I love research. There is a special freedom in research – you’re not confined to a certain path (even if you wanted to be) because things hardly ever go to plan. But that just means you can change direction and make a project truly yours. I am thankful for this opportunity that has renewed my excitement, and also brought me so much hope about who the future scientists of America will be. I hope that there will be more scholars coming out of the US territories, especially Saipan and Guam, because there is huge potential!

Folta: While I was born and raised in the Northern Marianas Islands and Guam my whole life, I am not a Pacific Islander by blood. I come from a multiracial family, but I identify strongly with Pacific Island culture and values. It is an honor to represent my home in my career endeavors and I will always be in support of Pacific Islanders making an impact in the scientific community.