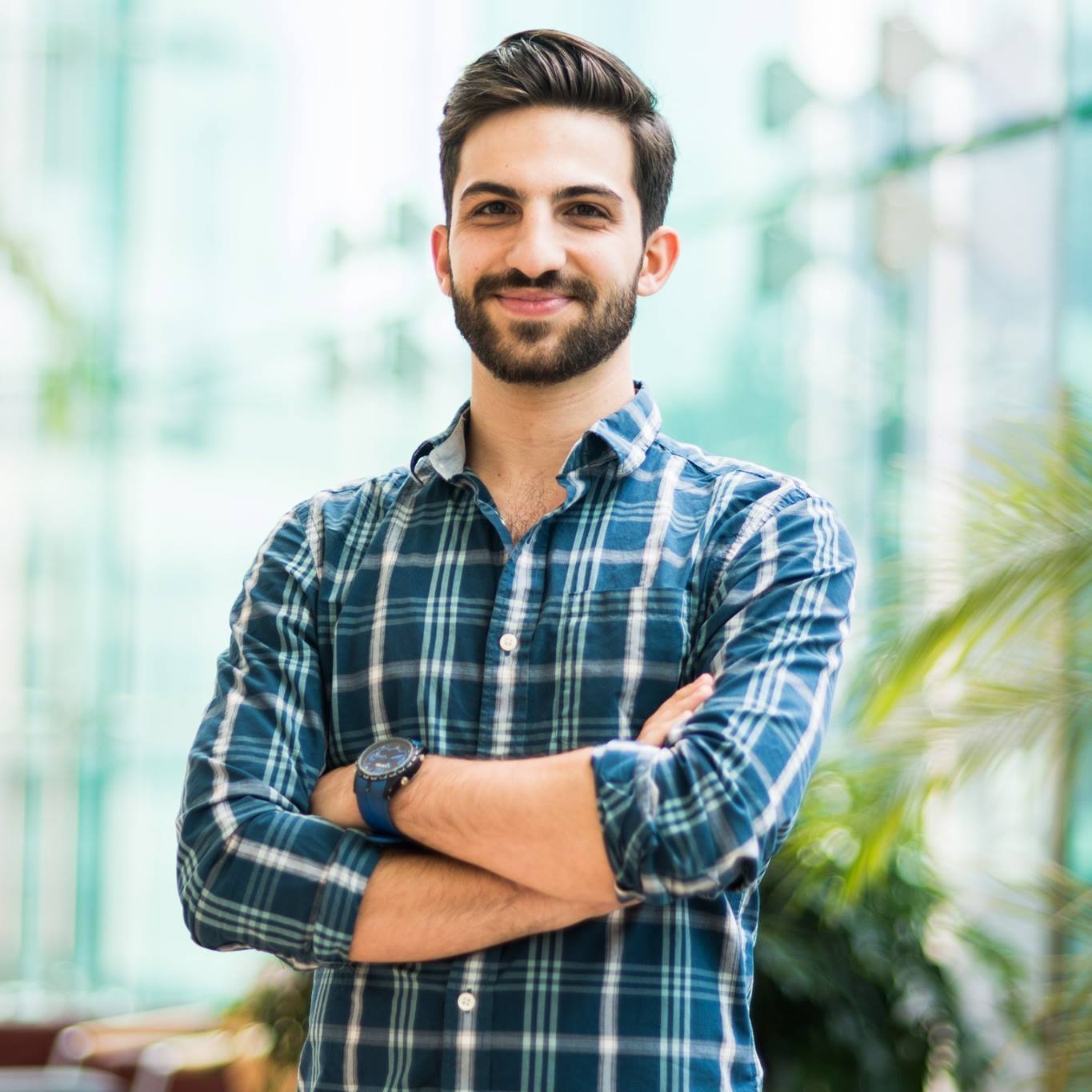 Fifth year Ph.D. student Alexi Choueiri used this past summer and the hiatus in lab work to catch up with life. “I feel like the pandemic has given me the space to catch up with myself almost resembling a sabbatical of some form,” he says. “I’ve been learning how to enjoy the little things in life while building a new relationship with work, creativity, and productivity.”

He also spent part of his summer talking to deferred Scholars and fellow alumni of the Amgen Scholars Program (ASP) in the Summer Science Series (S3). A 2015 Amgen Scholar at Harvard, Choueiri shared his experiences selecting a lab for his Ph.D. and the drives behind his research.

His fascination with neuroscience and biotechnology comes from a deep-rooted drive to understand the human condition and help alleviate pain and suffering, something he hopes his work at MIT will help address.

ASP spoke with Choueiri about his early science inspiration growing up in Lebanon, his time as an Amgen Scholar, and his current research in neuroengineering and biotechnology at MIT.

Choueiri: From a young age, I was always questioning. It reached a point that I was constantly asking arbitrary questions that my parents didn’t totally have the answers to. Why is a banana yellow? Why do we exist? Things of that sort. I grew up in Lebanon where exposure to religion and conflict kept the questions alive: Who has the truth? I also watched many nature videos and documentaries. Growing up in the concrete jungle of Beirut, I found it to be an escape from the city and loved to learn about animals, the universe and whatever interesting, awe-striking information I could get from the TV. I began to think for myself more, and science became a mode for making sense of the world. I still find myself to be very spiritual and science as a useful language.

Cancer also left me with an intellectual itch from a young age. I remember meeting my cousin who survived medulloblastoma and was curious to understand how it spread. I was also surprised that people didn’t know how to deeply explain to me what cancer was or why there wasn’t a cure, slowly learning that biology isn’t totally figured out with many unknowns. Realizing the textbooks used to teach in schools are not written in stone was a shock.

ASP: How did those interests evolve between high school and Amgen Scholars?

Choueiri: During my last year of high school, I began doing research in a lab focused tumorigenesis of glioblastoma multiforme, the most lethal brain tumor in adults. Later on in college with new knowledge and skill sets, I sought to investigate other facets of brain cancer biology and explore additional pathways of cancer progression at MD Anderson Cancer Center in Texas. Seeing how my efforts could potentially alleviate disease, I knew research was for me.

With experience in several labs conducting brain cancer research, I wanted to branch out to other aspects of molecular neuroscience. My interests shifted from brain cancer to mechanisms of neural plasticity and the biology of sensory experience. To fulfill this interest, I applied and was accepted to the Amgen Scholars Program at Harvard University where I began my research journey into dissecting the molecular pathways of neurons before coming to MIT for my Ph.D.

To simply be around people my age nerding out on science and research made me feel like I belonged.

ASP: What’s your favorite memory from or part of the Amgen Scholars Program?

Choueiri: The scholars were amazing. To simply be around people my age nerding out on science and research made me feel like I belonged. I was not considering a Ph.D. at all until my time in the program. Making friends with people who speak a similar language is what drew me in and how nice/kind/supportive everyone was. They made me feel talented when I didn’t entirely have the confidence myself. They saw potential in me that I did not see and we collectively supported each other and had fun in the process

ASP: What was your path from Amgen Scholars to where you are now?

Choueiri: I was an Amgen Scholar at Harvard the summer of my junior year and immediately decided I wanted to apply for a Ph.D. and got accepted into MIT. I had never planned — or had any inkling — of going into academia but it ended up being the perfect environment to pursue and explore my interests.

ASP: What is your current research at MIT?

Choueiri: Our group develops tools that enable the mapping of the molecules and wiring of the brain, the recording and control of its neural dynamics, and the repair of its dysfunction. We apply these technologies for the systematic analysis of brain computations, aiming to reveal the fundamental mechanisms of brain function. Within that, I have been focused on developing a protein sequencing technology to map the biomolecules in biological systems. The lack of technology for high-resolution protein-level analyses represents a significant gap in advancing important biological research. To address this issue, single-molecule identification and sequencing of proteins would allow for high resolution interrogation of the proteome and also enable ultrasensitive diagnostics critical for early detection of diseases.

ASP: What has been the most exciting thing coming out of your current work?

Choueiri: I would say the ability to think about revolutionary technologies and how to solve problems. You learn how to constantly adapt your thinking to constantly evolve the work at hand. I feel like it has helped develop my personal philosophy that most of our problems can be solved; it’s just a matter of time and groups of people with energy to unravel the solutions.

Life has unraveled in ways that have greatly surpassed my imagination. I never thought I would be in a Ph.D. program, yet alone MIT. I have found these years to be more fun, socially and intellectually than any phase of my life.

ASP: What do you think most prepared you from Amgen Scholars for your current work?

Choueiri: I would say getting over “imposter syndrome,” the constant feeling that I am somehow a fluke and don’t deserve where I’ve been and where I am going. It is easy to feel like my progression is one big mistake, but having a community has helped develop and reinforce the confidence I have needed to feel like I belong.

ASP: Did you imagine this is where you would be 5 years later? Why or why not?

Choueiri: Life has unraveled in ways that have greatly surpassed my imagination. I never thought I would be in a Ph.D. program, yet alone MIT. I have found these years to be more fun, socially and intellectually than any phase of my life. There have been rough patches but for the most part learning how to invent and getting good at it was not something I ever knew I was capable of. Now I am living it.

ASP: What advice did you share in S3 for Amgen Scholars who are looking to pursue a Ph.D.?

Choueiri: Seriously consider the city and the culture of the campus. Getting a Ph.D. is a long-term commitment with a holistic experience. It becomes very integrated with your lifestyle so your surroundings and the people you meet are a huge part of the experience. The specifics of your program represent only one piece of the puzzle; you may want to engage with other elements of the university/institute/city at large more than you think.

I hope my Ph.D. will act as a launch pad to unravel the mysteries of nature and share my awe of this complex system with the world.

ASP: What advice did you have for selecting a lab?

Choueiri: Because of the length of Ph.D., the lab decision really comes to a sustainable/ marathon type mentality. I think that by finding people and a lab culture you will have fun with, you are more likely to endure the process. Consider the emotional and social dimensions of making that choice!

ASP: What is the driving force behind your work?

Choueiri: A combination of innate curiosity of the world and to transcend limitations of society to make a better one. In simpler terms, I also just like to work on cool things with fun people. Sometimes it’s all mixed in with a dash of existential dread — too many questions and so little answers. I hope my Ph.D. will act as a launch pad to unravel the mysteries of nature and share my awe of this complex system with the world.