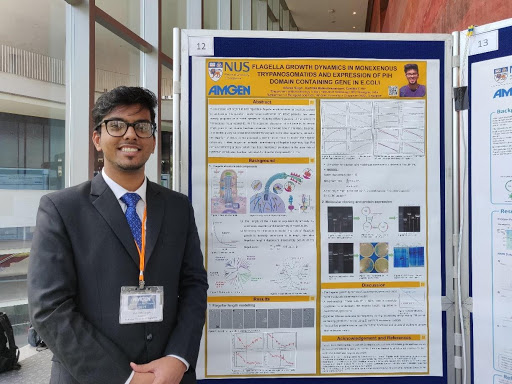 Adarsh Singh’s love for science began as a young child: He would conduct experiments and enthusiastically share his findings with his family. His burning curiosity to uncover the logic behind things eventually grew into a passion for life science.

As a third-year student at Indian Institute of Technology Kharagpur, Singh happened upon the Amgen Scholars Program and was drawn to its offer of a real-world research experience and independent study. He applied for the program at the National University of Singapore and became an Amgen Scholar during the summer of 2019.

Singh’s summer research project investigated the management of microstructures within a cell, working in the lab of Associate Professor Cynthia He. It was his first opportunity to participate in independent lab work. “My previous experiences at my home university have been very different. I mostly shadowed other scientists’ projects and felt that I did not have the autonomy to undertake experiments without the permission of the researcher,” Singh says. “This was very different from my Amgen Scholars Program experience, where I was independently managing my research project from end-to-end. This helped me grow as a scientist immensely.”

Singh also appreciated how his colleagues and fellow researchers at his lab were always willing to lend a helping hand when he faced challenges. “There were times when I did not get the results I wanted despite repeating the experiment a few times. My mentor, Karthika Balasubramaniam, who is a Ph.D. student, helped me reflect critically on the process to understand what could have gone wrong,” he says.  “With her insight, I eventually got the results that I was looking for.”

Both within and beyond the lab, Singh was immersed in Singapore’s diverse and inclusive culture. In his lab, he met scientists from all over the world, including China, Canada, and India. “I had the chance to know and work alongside people from different countries and experience a different lab culture from my home university,” he says.  In addition, Scholars could attend talks by university faculty, where they shared their work and research journey. “I found these sessions enlightening; they gave me a broader perspective of what careers in science look like.”

Singh’s involvement in the Amgen Scholars Program has strengthened his resolve to be a scientist. “The program gave me the confidence to work independently, which will help me become a better scientist,” he says. “It has motivated me to build on the skills that I’ve gained so that I can eventually reach my goal of creating something that people in my country need.”