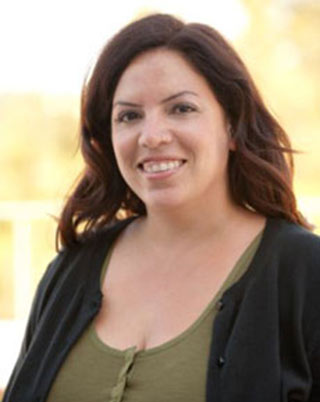 Her goal was to determine whether and how these bacteria monitor the density of their neighbors. Such communication probably contributes to virulence, and “if there’s some way to disrupt [bacteria’s] ability to sense their surroundings, then that might be a way to help create drugs in the future,” Sanchez says.

First, Sanchez needed to make the bacterial strains from scratch, and only a few weeks into the program the organism was proving difficult to grow. She and her postdoctoral mentor, Sharon Hoover, discussed what to do if the S. pneumoniae didn’t multiply within the next few hours. Sanchez could come in early Saturday morning and start over—and that’s what she did.

Sanchez arrived in Lazazzera’s lab prepared for the ups and downs of science. At CSUN, she had spent a year working with Michael Summers using different techniques than the ones she was learning in Lazazzera’s lab. Before leaving for UCLA, she discovered her recent experimental results were inconclusive. These challenges didn’t faze her, however. “I love microbiology,” she says. “I can’t picture myself doing anything else.”

Science is a relatively new career path for Sanchez. Starting with a single biology class at a community college six years ago, Sanchez is on track to become a microbiologist in academia.

“Compared to other undergraduate students, Sandra is certain what she wants to do,” says Lazazzera, associate professor of microbiology, immunology, and molecular genetics. “She's showing all the right skills and the right motivation and what it takes to succeed in science.”

Sanchez’s project was part of a larger aim of Lazazzera’s to determine whether S. pneumoniae engage in ‘quorum sensing,’ a chemical signaling process that helps some bacteria sense their surroundings.

Researchers already knew that small proteins called Phr peptides are critical for quorum sensing in other bacterial species, such as Bacillus. Lazazzera and her collaborators analyzed the genomes of S. Pneumoniae, finding that they might also use the peptides.

Sanchez’s goal was to help validate that S. pneumoniae produce Phr peptides. In particular, she hoped to determine which part of a supposed Phr gene becomes the signaling peptide, and whether that peptide indeed plays a role in quorum sensing.

But first she needed to build bacterial strains containing the correct markers of the Phr peptide. She spent most of her summer creating versions with deletions in different regions of the gene to understand which parts code for the signaling peptide.

Although Sanchez was used to working with bacteria, she had to learn many new techniques in Lazazzera’s lab.  “I never worked with human pathogenic bacteria. A lot of the construction they do is different,” Sanchez says. Lazazzera and Hoover helped Sanchez understand the numerous steps in construction.

“The speed with which she picks up stuff has been really amazing,” says Hoover. “She’s already picked up the nuances of how to work with an organism that’s tough to work with.”

By the last week of the program, Sanchez had constructed the strains and was ready for her first assay. Unfortunately, the samples containing the full Phr peptide looked the same as the ones that lacked Phr, suggesting that the genes for the peptide hadn’t properly inserted or that they had broken during one of the construction steps.

“We learned a lot of what can’t be done,” Sanchez says. Lazazzera’s team will do the experiments again after they try other ways to insert the Phr peptide.

Rather than attending college immediately after high school, Sanchez worked as a receptionist for a software company. She quickly climbed the ranks to executive assistant and traveling sales rep.  Although she made a good living, she wasn’t happy. “I missed my family and all the things you miss when you travel so much,” she recalls.

In 2005, she took a biology class at Los Angeles Valley College, and continued to take classes while working full-time.

She decided to pursue an associate’s degree in nursing and went back to school full-time in 2007, leaving her job and working part-time as a tutor at Valley. That summer, she participated in UCLA’s Bridge Summer Research Program, which helps community college students learn about research.

Although she came back from that experience knowing that she wanted to be a scientist rather than a nurse, she credits her mentors at Valley—in particular, Becky Green-Marroquin, who introduced her to the Bridge Program—for pushing her to transfer to CSUN. Her mentors helped her connect to Summers and begin working in the lab the summer before starting at the university.

Sanchez has no regrets about her path. “I’m very proud of what I’ve achieved. I’ve sacrificed a ton to get here, and I wouldn’t trade anything that I’ve done,” she says.

She still tutors students part-time at Valley College because she enjoys teaching and hopes to pay forward the individual mentorship she received at Valley. “It would be awesome to inspire a student,” she says.

For graduate school, Sanchez has her heart set on UCLA—which is why she applied to the Amgen Scholars Program at UCLA. Working with people who are passionate about microbiology showed her what graduate school would be like. “It was an awesome experience. It solidified any minor doubts I may have had,” she says. “I came back excited about starting graduate school.