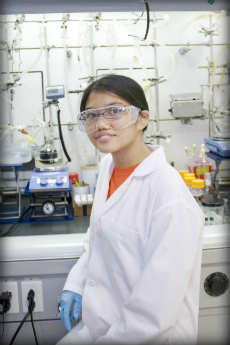 Then a junior at California State University, Los Angeles, 17-year-old Angela Guerrero walked into a gleaming new chemistry building on the California Institute of Technology (Caltech) campus and took the elevator to the top floor — which houses several of the university’s synthetic chemists — to observe the working environment.

A graduate student saw Guerrero walking the hallways and offered to introduce her to some of the faculty members. That’s how she first met Brian Stoltz, her Amgen Scholar faculty mentor, and saw his lab.

“I felt it was the right fit when I saw the lab,” recalls Guerrero, who is majoring in chemistry and biochemistry. “Everyone was happily working. It seemed like a great environment in  which to do research.”

In summer 2011, Guerrero joined the Stoltz group to help synthesize variecolin, a potent natural product with the potential to be used to help treat HIV. The project is part of Stoltz’s  goal to synthesize complex biologically active molecules.

Variecolin is an organic compound produced by fermentation of a fungus (Aspergillus variecolor), but to be used in pharmaceuticals, the compound needs to be synthesized in large quantities.

Scientists have tried without success to synthesize variecolin. Because there are so many steps in constructing the molecule — and the process of synthesis can be inefficient — there is very little product left in the final stages of the synthesis.

Rather than taking a linear approach, Stoltz’s group is taking a convergent approach to the synthesis, making two large fragments of the molecule and combining them to get the final molecule.

Wu will continue working on the project for the next year, and he says Guerrero was an important contributor to the final goal. “Not everyone has sense to do science, especially our research. It’s tough chemistry,” he adds. “In just 10 weeks, she did really well.”

Although she was only 17 years old as an Amgen Scholar, Guerrero entered the program with previous research experience. Guerrero started college at 13, through Cal State L.A.’s Early Entrance Program. In 2010, she joined MARC U-STAR, a minority research program offered by the National Institutes of Health.

Through the MARC Program, Guerrero worked with Matthias Selke’s group to study the metabolism of resveratrol, an ingredient commonly found in red wine that is thought to extend the lifespan in some animals.

Selke’s team wanted to find out how resveratrol reacts with singlet oxygen, a highly reactive form of oxygen that damages DNA and other molecules essential for life.

“We were curious and wanted to determine how singlet oxygen might react with resveratrol, this popular antioxidant,” Guerrero says. “What we found was that resveratrol does indeed have this notable antioxidant activity. “

Unfortunately, resveratrol is less efficient at removing singlet oxygen compared to other antioxidants, such as vitamin E and beta-carotene, the group found. Interestingly, however, in the process of studying resveratrol, the scientists found a new way to make Moracin M, a chemical used in traditional Chinese medicine to treat diabetes.

From that work, Guerrero was able to gain authorship on her first peer-reviewed study, published in Organic Letters in August 2011.

Guerrero is continuing research in Selke’s group and will be writing up those results as part of her thesis in the chemistry honors program at Cal State L.A. “We’re still looking at other derivatives of resveratrol to see if they also might proceed along the same kind of pathway,” she says.

In early 2012, Guerrero turns 18 and is applying to MD/PhD programs with the hope of becoming a physician scientist.

Such youthful ambition is not unusual in Guerrero’s family: three of her mother’s siblings — including her aunt, a renowned toxicologist — are doctors and began medical school before the age of 20.

“My aunt is one of my biggest inspirations for becoming a scientist.” Guerrero says. “She is a pediatrician, professor, and researcher, and she travels all around the world giving invited talks while also teaching medicine in the Philippines.”

Guerrero’s experience as an Amgen Scholar was instrumental in helping her decide to pursue organic chemistry research. “After having been in the Stoltz group and having had a really wonderful experience, now I’m certain that that’s what I want to do for a PhD,” she says, adding that she would be interested in working in the lab as a PhD student.

With an enriching Amgen Scholars research experience behind her, Angela feels prepared for graduate school, and looks forward to her life in science.

She also looks forward to some of the additional perks of adulthood. “When I go off to an MD/PhD program, I won’t need my parents to sign permission slips for club trips anymore,” she says.