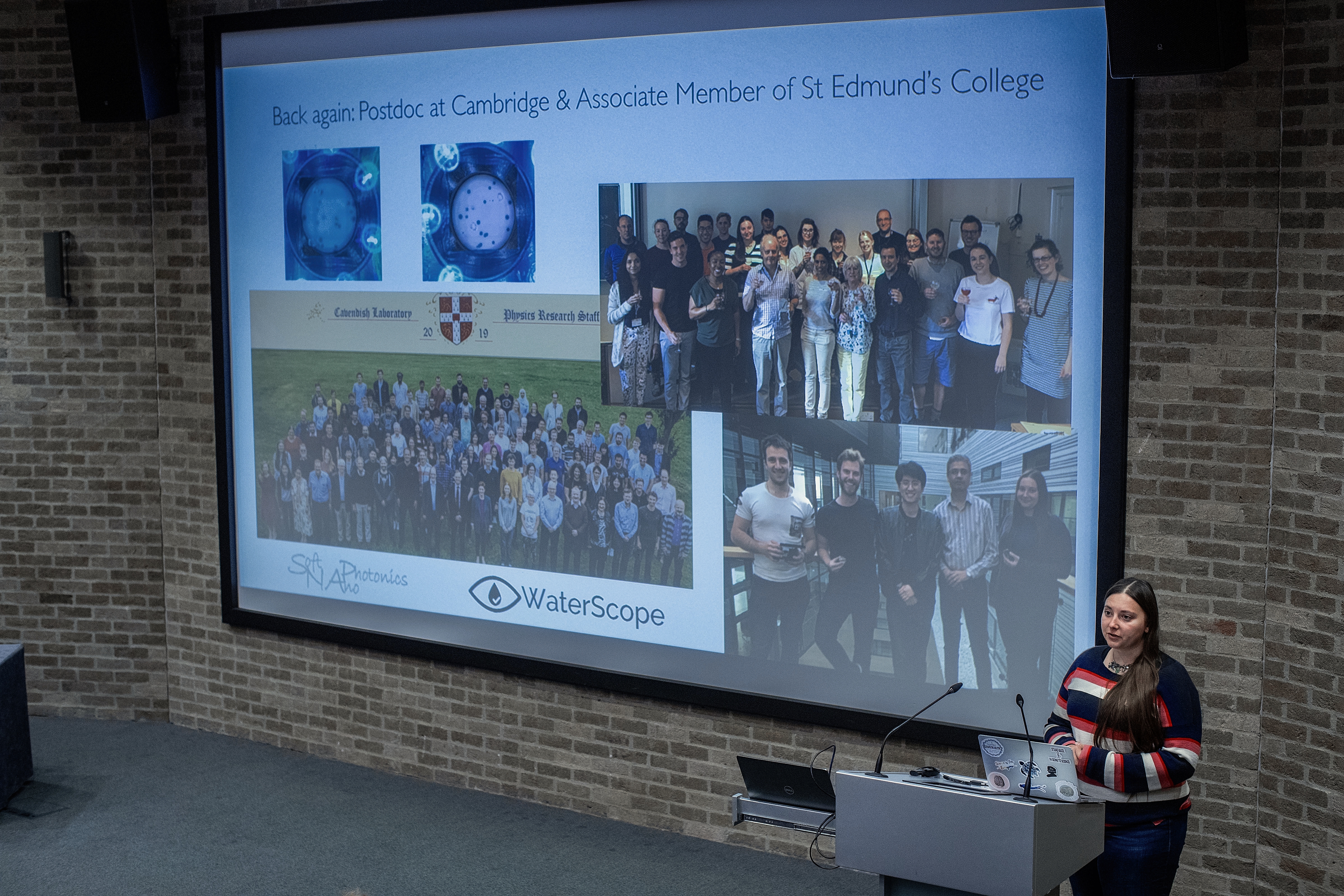 In September at the University of Cambridge, Alicja Dabrowska spoke to a captive audience at the European symposium of Amgen Scholars about her career and lessons learned along the way. One of her biggest tips was to be proactive. By making the most of every opportunity that has come her way, Dabrowska has built a successful path from the Amgen Scholars Program (ASP) to her current postdoctoral work at the University of Cambridge.

One of her best examples of this is how she landed her first job. Having a bachelor’s degree in marine biology and a master’s degree in bioengineering, Dabrowska was not entirely confident going into her Ph.D. program in microbiology. “I found this amazing, intensive Microbial Diversity summer course at the Marine Biological Laboratory in the United States,” she recalls. “I applied and got accepted. Two years later, upon finishing my Ph.D., I was invited to teach at the course, which was my first proper job,” she says.

We caught up with Dabrowska after the European symposium to learn about her early science experiences in Poland, her Amgen Scholars memorable moments, and her work now.

ASP: How did you first become interested in science?

Dabrowska: I have always been interested in nature and how our world works. When I was a young child, I wanted to be a geologist. In primary school, I became fascinated by natural history and herpetology. In my teenage years, I fell in love with hydrology and biology. My parents were always very supportive and helped me pursue my interests. I love the feeling of working at the edge of our knowledge and the satisfaction that contributing to the advancement of science brings.

Dabrowska: I grew up in Pruszcz Gdanski, a small city close to Gdansk in Poland. I was very lucky to attend an International Baccalaureate Diploma Programme high school in Gdansk, and part of the program was an independent research project. I remember measuring precipitation and river water levels every morning for two months to assess flash flood danger for my city. It was not easy, but it was exciting, for the first time, to learn something that nobody else has studied before. As a part of the program we also had the opportunity to attend lectures and practical classes at the University of Gdansk and a local hospital, which reinforced my interest in biology.

ASP: How did you learn about the Amgen Scholars Program?

Dabrowska: My mum saw an Amgen Scholars Program advertisement in a magazine and told me about this great opportunity. It was 2010, I was in my 2nd year of marine biology at the University of Southampton and was looking for research opportunities. I had always wanted to do a Ph.D., so getting real laboratory experience was crucial. When I heard about ASP, I knew I had to try – it was just a perfect match for my interests. I emailed three professors at Cambridge, got a positive reply and a place on the program. It was a very interesting project on the interactions between bacteria and microalgae in the context of microalgae biofuels.

ASP: What was your favorite part of the Amgen Scholars program?

Dabrowska: It is difficult to pick one, I loved all of it — the independence and responsibility of having a research project, the career-focused seminars, the opportunity to present my work, the lectures during the symposium, spending summer with like-minded people from all over Europe.

ASP: Can you share a memorable story or moment from the program?

Dabrowska: I remember we had an amazing day out at Alton Towers and a great goodbye party. I also remember setting up my very first experiment from scratch – the excitement and worry that came with that. It was also absolutely great and very moving to have my birthday during the program. Other Scholars baked a chocolate cake and prepared a surprise party; I have never before heard “happy birthday” in so many different languages!

ASP: What are you doing now and what are your career goals?

Dabrowska: In February 2019, I joined the University of Cambridge as a postdoc at the Department of Physics and the Department of Veterinary Medicine working on new methods of detecting bacteria in drinking water for low and middle-income countries. It is a very exciting, interdisciplinary project combining microbiology, physics, software and hardware engineering which can potentially save thousands of lives. In September, we had a field trial in India, and now I am preparing for testing in Tanzania later this year.

I am also an associate member of St Edmund’s College. After 9 years away, I feel honored to be a part of the College community again, and I hope to inspire future generations of scientists.

In the future, I would love to lead my own research group.

In these times of crisis of trust in science, it was incredibly encouraging to see so many young people interested to hear from someone who has gone through the tough and challenging experience of doing a Ph.D.

ASP: Have you stayed in touch with any scholars from your cohort?

Dabrowska: Yes, I keep in touch with a few scholars from my cohort. It is very exciting to watch how our careers progress and to celebrate personal and professional achievements together.

ASP: What was it like to present to Amgen Scholars at the European symposium this past summer?

Dabrowska: It feels great to be able to give something back to the Amgen Scholars community. In these times of crisis of trust in science, it was incredibly encouraging to see so many young people interested to hear from someone who has gone through the tough and challenging experience of doing a Ph.D. I am still in touch with some of the students who approached me after the talk, I hope I can be a good mentor and help them on their scientific journey. Teaching and mentoring are an important part of being a scientist, and I want to make sure that it forms a significant part of my scientific career.

ASP: Is there anything else you would like to add?

Dabrowska: As doing a Ph.D. is very challenging and can be an isolating experience, I am very passionate about raising awareness about the importance of maintaining good mental health. I am a Well-being Advocate at the Department of Physics and provide support and signposting to anyone facing difficulties.