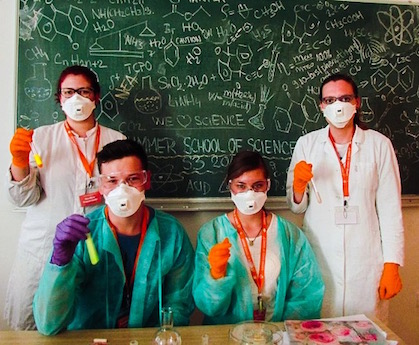 Every summer, 40 high school students from Croatia and other areas of Europe gather for 10 days to conduct hands-on research projects with mentors who are only a few years their senior. In the small town of Požega nestled in the mountains of eastern Croatia, these students learn about opportunities in science that lie ahead of them.

Former Amgen Scholar Matilda Maleš is one of the leaders of the program, Summer School of Science, and every year she tells the high school students about the Amgen Scholars Program and encourages them to apply. Maleš participated in the LMU Munich Program in 2009. One of her former mentees in the Summer School, Tin Kocijan of the University of Zagreb, is a 2016 Amgen Scholar at ETH Zurich.

“Matilda and the other project leaders in the Summer School of Science definitely encouraged me to apply and helped me believe [that a spot in the Amgen Scholars Program] was not unreachable for me,” says Kocijan, who majors in biology. In addition, Maleš connected Kocijan to another Amgen Scholar alumna who was working on a PhD at ETH Zurich, and who gave him insight about the university and the Amgen Scholars Program.

The Summer School of Science was started in 2001 by Croatian PhD students who saw few opportunities for younger students to gain a foothold in science. The program is divided into two main camps (one for grades 9-10 and the other for 11-12) that each host a variety of workshops, ranging from catching and preserving spiders to building artificial intelligence. Esteemed scientists give evening lectures. Although the program’s format and target age differs from that of the Amgen Scholars Program, the two programs share the important goal of exposing students to hands-on, interactive science and helping them create a network of peers who are interested in science.

As a high school student, Maleš herself participated in the Summer School of Science. “I was living in a small town, and my high school wasn’t well equipped to do experiments,” she recalls. “It wasn’t clear to me what the job of a scientist was and what daily life was like.”

She enjoyed the program so much that she returned as a participant the next year, and in subsequent years she taught and helped organize the program. It remains a grassroots effort that Maleš, a doctoral student at the European Molecular Biology Laboratory (EMBL) Heidelberg who will graduate by year’s end, plans with a team of other early career scientists. Everyone is volunteering their time.

In particular, the group meets throughout the year to develop the camps’ programming, vet applicants, secure sponsors (the Amgen Foundation is one of the 2016 funders), and arrange accommodations for students and the program leaders who come from all over Europe. “I’ve gained a lot of soft skills in managing and organizing, which are incredibly valuable,” Maleš says.

Maleš feels motivated to give back to the Summer School of Science because as a participant, not only did it help her gain a foothold in science but it also allowed her to meet people from countries outside of Croatia. That, in turn, gave her confidence to move outside of her geographical comfort zone and apply to LMU Munich Amgen Scholars Program. She enjoyed Germany so much that she moved to Heidelberg for graduate studies.

For Maleš, seeing students such as Tin Kocijan go on to achieve other opportunities in science motivates her to continue volunteering at the Summer School of Science. “It feels nice to have given back and made a difference,” she says.

Kocijan, meanwhile, has delved into his summer as an Amgen Scholar in the lab of Hugo Stocker, where he is studying male-female differences in the body sizes of fruit flies. “I am honored to be an Amgen Scholar at ETH Zurich and to have such an opportunity to learn and gain a vast amount of experience,” he says. “I now realize that the Summer School of Science has prepared me really well for these challenges.”