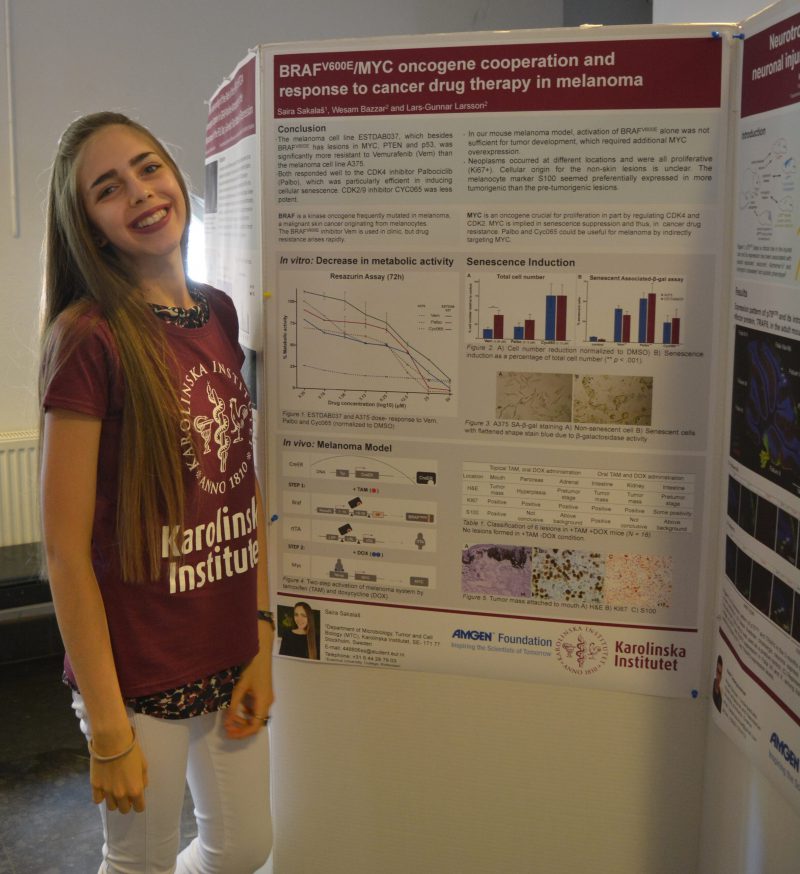 For Saira Sakalaš, learning she was selected as an Amgen Scholar last year was the beginning of a new chapter in her life. She says she will never forget the moment she got an email from the Karolinska Institutet in Sweden offering her the fellowship.

“During a break at an event at my university about what new technology can create for society in the future, anyone could have heard a loud scream,” she recalls. “It was me, crying out of happiness after reading that I would be an Amgen Scholar, a title only a few students can get!” That break turned into a celebration, Sakalaš says, as her peers knew how excited she was about participating in the hands-on biotech research program.

Now in her last year of undergraduate studies in molecular and cellular biology at Erasmus University College in Rotterdam, Sakalaš credits the Amgen Scholars Program with helping her decide to pursue graduate work in biomedicine with a goal toward a Ph.D. and then research in the biotech industry. “I have realized that the research life is something that would definitely fulfill me as a person,” she explains. “I want to explore research in industry, an area that was no-go for me just a few months ago.”

In Cambridge, Sakalaš heard from several speakers working in applied research. “The researchers constantly emphasized how failure is an intrinsic part of science and progress, how committing to one field in science is not permanent, and how the scientific path can be flexible and dynamic, including that it is perfectly possible to combine family and the research life in the lab,” she says. “All the ‘taboo’ topics I was fearing about life as a scientist in the future were explained, all the myths debunked.”

Sakalaš points especially to talks from three Amgen Scholars alumni who changed her perspective on biotechnology. “It’s always nice to hear a more relatable story from someone who once went through the same process as you,”she says. “They presented how the Amgen Scholars experience opened the door to biotechnology in their future careers, either in medicine, tissue engineering, cardiology or cognitive science.”

Science has been an important part of Sakalas’ life since her childhood in Bosnia and Herzegovina. “I got a nickname of a ‘blond nerd’ in the elementary school,” she says. “I looked forward to learning new things day by day. Science became something that gave me a sense of security and confidence.”

The opportunities for practical application of science in the region were limited, so her family supported her decision to attend an international high school in Bosnia and Herzegovina, which led to her undergraduate work in Rotterdam. One big difference, Sakalaš says, between attending university in the Netherlands and Sweden compared to in Eastern Europe is the hierarchical structure. “It is impossible to call your professor by her/his first name,  whereas in Rotterdam, not only that we call our head of the department by his nickname, but he is very friendly with us,” she says. “The working environment is much more relaxed.”

Sakalaš is excited to take her passions for science to the next level with a research career. “Science for me is a need to understand ourselves and our environment, a tool to create a better tomorrow and a passion that drives me through my life,” She explains. “And I love every aspect of it, not only the ‘ups’ when you achieve something you like but also the ‘downs’ when you are pushed in the corner of the wall and forced to climb up the ladder of success and prove that you can do it better!”